You are here: Home » Magento POS » Top Statistics That Should Lure You to Invest In Mobile POS System

These days, the tech-savvy consumers have gained direct access to more information like never before. With the simple tap of a tablet or a smartphone, shoppers can get a hold of a plethora of product information and pricing instantly. The advancements in retail technology has empowered them to take the best decisions for their personal preferences, wants, and basic requirements.

Undoubtedly, the one taking the control of driver’s seat are consumers. To lure the attention and dollar of the shoppers, retailers must be able to meet and surpass their expectations by offering compelling and relevant experiences. Especially, when we’re talking about the store. So, how can we make this concept come alive? Mobile POS system is the answer.

We’re sure you might’ve heard a lot about mPOS here and there all the time, but if it has not pushed you to go for the system yet, it’s high time you need to think again! Once relegated specifically to only start-ups and food trucks, mPOS has managed to gain significant traction over the span of last few years with several biggest names in the brick-and- mortar system, such as Home Depot, Nordstrom Rack, and Urban Outfitters. Nevertheless, it looks like the trend is here to stay. As per the ABI Research, it’s projected that Mobile POS while comprises of almost half of all the available POS terminals by the year 2019.

Got a Question? We’re Here to Help You! 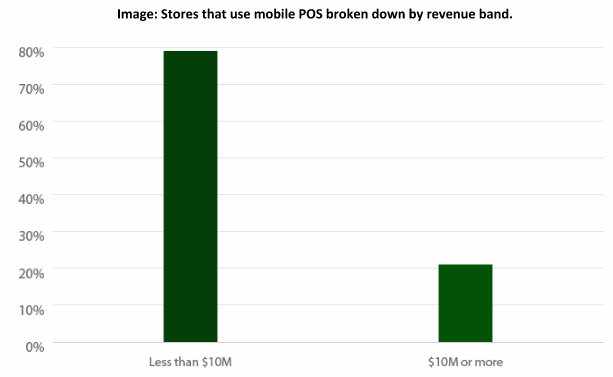 The traditional POS systems – basically a standalone terminal having a receipt printer, cash register, and credit card reader – may sound all too familiar, however, replacing them with mobile phones and tablets can make a huge difference in fueling sales and growth. From hiked profits to enhanced autonomy and flexibility over business operations, a mobile POS system is the perfect solution for businesses no matter the small scale or large ones.

Don’t be afraid! You do not have to be a mom-and- pop or possibly a megabox in order to reap the sweet fruits of mobile POS system. In fact, IHL Group’s latest research states that mPOS has reported a dramatic boost in adoption rates among mid-sized and small retailers. 79 percent of mobile POS systems are utilized by small to medium range companies reporting less than $10M in sales, whereas only 21 percent is used by large scale business enterprises.

Before we jump into some more statistical data, let’s take a look at two of the widely successful adoption models of mobile POS system.

Who would dare to turn away customers who’re willing to pay? After following a careful observation of how mPOS is changing the dynamics, this company turned up to BvPOS for help. BvPOS is one of the best POS systems available in the market which is responsible for creating success stories of many companies. Not only did the POS helped the company by offering best in class services, but also boosted the sales of the store up to ‘1 lakh dollar’ in the first seven days.

“The market of mobile POS is evolving at a tremendous and remarkable pace with the increased popularity of mobile payments and e-commerce markets,” says Chintan Shah, CEO of Brainvire whose best-in-class POS system has helped many largest retailers boost their volume sales. “Today’s customers are demanding enhanced digitized payment choices to improve the in-store shopping experience. The highly advanced features offered by non-traditional modes of payments, i.e. prepaid cards and mobile, have encouraged POS adoption with tech-savvy shoppers of today.” He concludes.

This company figured out that adopting POS system would be a better option for them because they had a high probability of losing 18-20 percent of sales if they continued accepting only cash. So, they adopted a mobile POS system from PayPal Here, which eventually enabled them to increase sales by accepting credit cards. After using PayPal Here, the company’s sale increased by 20 percent. It also allowed them to sell their products everywhere, right from CrossFit events to fitness studios and gyms.

Now that you’ve seen how various companies have profited from the POS systems, let’s move back to talking about your real interest – FIGURES!

The mobile POS retail market, holding 93 percent of total retail dollar volume of the US, towers way above the online market, and presumably, will continue to do so for upcoming years. But digital realm’s has growing popularity has fundamentally altered the POS’s nature, as brick-and- mortar retailers embraced elements of online and mobile channels to remain competitive. Annual POS Forecast 2013 – 2018 by Javelin Strategy & Research evaluated the actual and forecast variations in the retail POS market, identified key drivers of the market change, and tracked payments mix data. You can take a look at the figures in the image below. 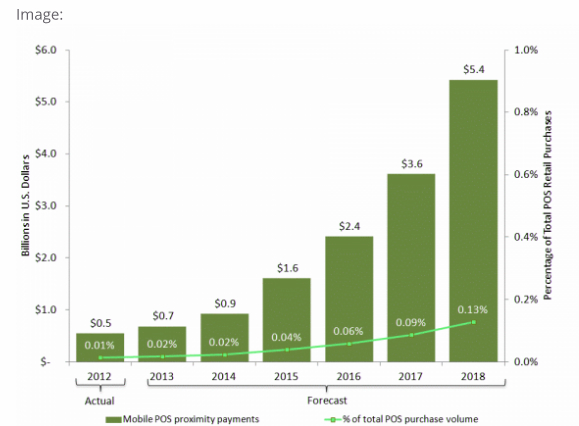 Although mPOS proximity payments add up merely 0.01 percent of 2012’s total retail point-of- sale volume, mobile devices have transformed the in-store shopping experience for forever, acting as both a channel and payment option for purchasing. It’s projected that over the span of upcoming six years, a massive industry-wide force for mobile technology will aid boost mobile payments to tremendous growth and will allow mPOS proximity payments climb up to $5.4 billion by the year 2018.

Some interesting statistics to take a look at:

• In 2012, total retail POS purchase amounted for US$3.98 trillion, and is expected to reach near US$4.2 trillion by 2018.
• Mobile payments will reportedly have the largest compound annual rate of growth as compared to other mobile payment forms over the span of next five years.
• Debit cards have surpassed cash payment option to become the most preferred mode of payment for Gen Y shoppers.
• 88 percent of companies have had their POS for less than 5 years.
• 44 percent of all stores utilize mobile POS.
• 79 percent of these users are small to mid-size businesses.
• iPad is regarded as the preferred device to operate a mobile register on, however, when it comes to a smartphone, Android remains the best choice.
• 46 percent of companies spend no more than US$1,000 per year on their POS systems.
• 37 percent of companies have spent more on their POS software in past few years when they were budgeted for.
• The most desired feature used by retailers in their POS system is zero transaction charges. Mobile management app and employee scheduling capabilities are ranked second and third.

The mPOS card readers come with an advantage as they can be easily attached to a tablet or smartphone, and mobile’s universality is responsible for driving the connected hardware aspect of this growth. There are no doubts that the future of POS services will be cloud-based, which will ease the transition, i.e. from card to smartphone-powered payments. This transformation is motivated by the sudden rise in NFC contactless technology development, the emergence of host card emulation technologies, and mobile device-based payment technologies.

As per Grand View Research’s reports, the Global Mobile POS Terminals Market is projected to reach US$42.99 billion by the year 2022. 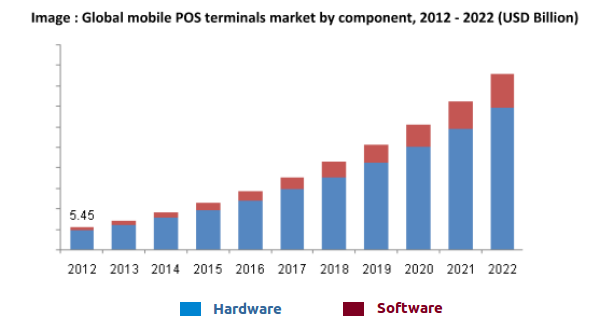 As cited by these reports, the main factors responsible for driving such massive growth are available in diverse forms and cover a wide range of industries and geographies. Accelerated adoption of mPOS systems across hospitality and retail sections are the key growth drivers of the market.

As you’ve already noticed, there are so many reasons why you should consider favoring the state-of-the-art POS system rather than continuing with the age-old cash register. POS devices reportedly cut back the price of doing business meanwhile boosting productivity, which can be called as phenomenal for the bottom line So? Are you ready to make this much-needed transition from the cash register to POS system?

16 Dec
eCommerce Alert: Upgrade to Magento 2.3 Before the Support for Magento 2.2 Ends

The date is set for the end of Magento 2.2 support. This has surprised and alerted all merchants who have… Readmore +

The Magento community always looks to initiate new trends in the e-commerce platform to improve the experience of the end-users. … Readmore +

By using a multi-vendor marketplace extension, you can convert your Magento Store into a complete online marketplace shop. The Marketplace… Readmore +

Magento 1.0 made its inception in March 2008 and Magento 2.0 in November 2015 with various upgraded features. Some of… Readmore +

Recently, I have been asked how is it possible for an e-commerce store to gain faster access to a broader… Readmore +

0
How Magento Extensions Can Help You & Your Potential Customers?

There is no denying that Magento is one of the most functional and customizable eCommerce platforms across the world, and… Readmore +

0
Reasons Why Magento Development Is Still In Demand

0
Bring Excitement to your Online Store with Magento Theme Development

0
Magento Theme Development – Free Or Custom, Which One Is More Preferred?

Ever since its inception, Magento has been at the center of attraction among the retailers and online store owners. Online… Readmore +